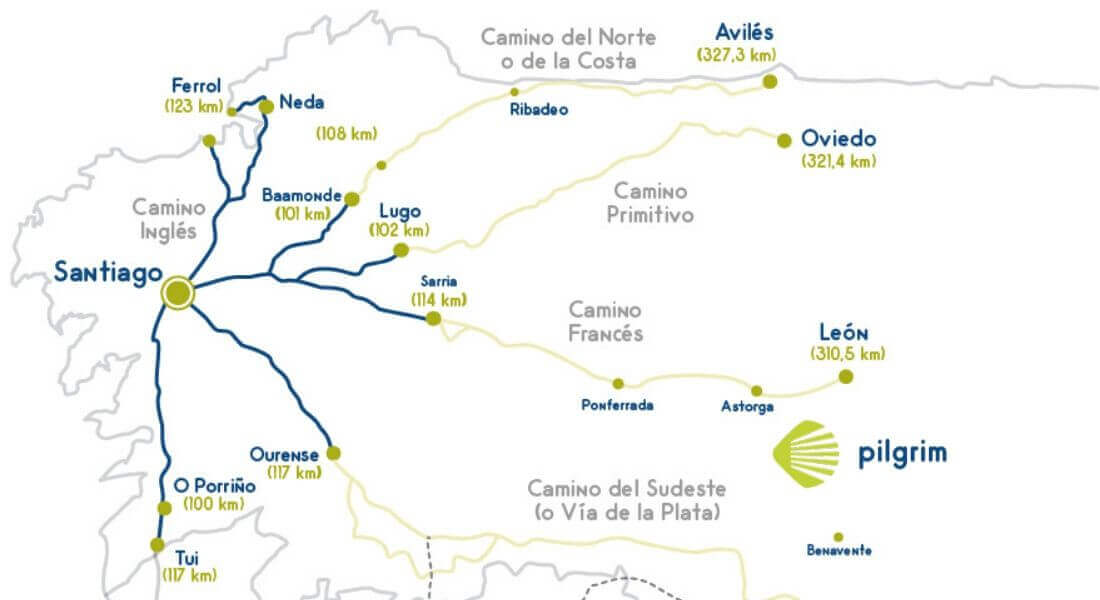 In our entry about the Compostela – wrongly referred to as Compostelana-, we explain that it is necessary to walk at least the last 100k to Santiago of any of the routes of the Camino de Santiago in order to obtain the Compostela.

You may also be interested in: which route of the Camino to choose

You can cover the last 100k to Santiago from many different points amongst all of the routes of the Camino: French Way, Primitive Way, Northern Way, Portuguese Ways, English Way, Sanabrian Way and Winter Way. Although there are other jacobean routes, they do not end in Santiago, but serve as connection between the above mentioned routes and numerous parts of the Spanish territory.

MAP OF THE LAST 100K OF THE CAMINO

You can see below each of the 7 routes from their starting point to the finish point at the entrance of the cathedral of Santiago de Compostela. Further down, we will have a deeper look at each of them so you can decide which one matches better your requirements. 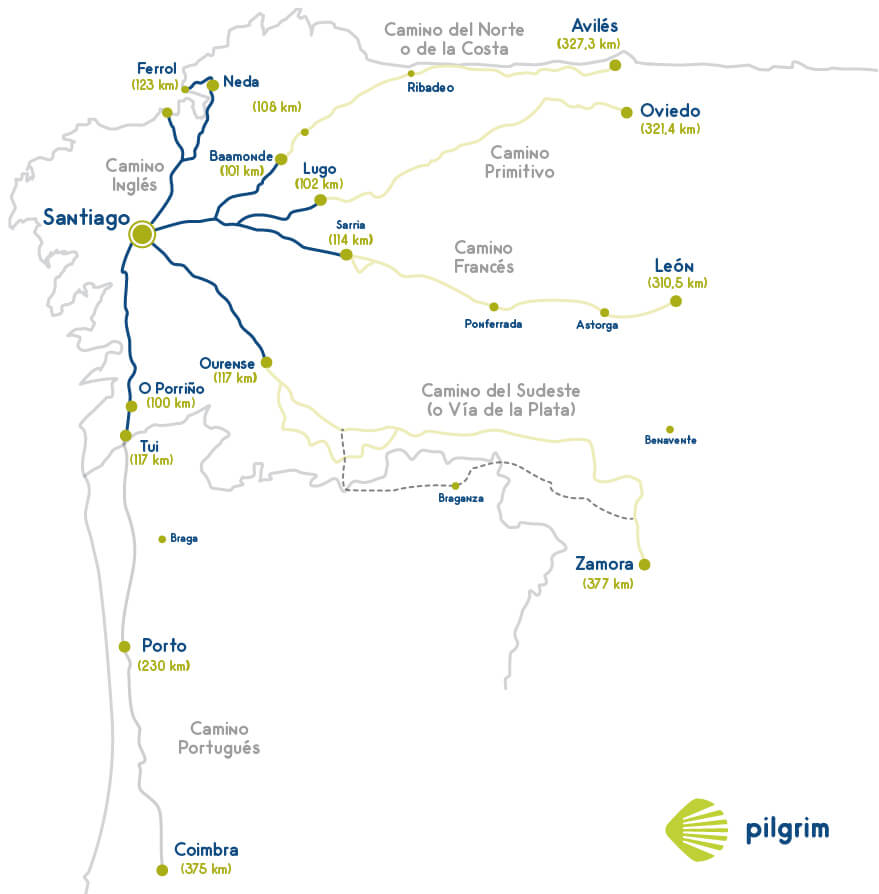 It is the most popular starting point for those pilgrims who embark on the Camino for the first time. Its easy course that can be completed in just 5 days makes it the prefect choice for anyone who is eager to wander the jacobean routes but do not have much time.

If we had to mention one downside, it would be that, due the fact that so many people choose this route, it can be a little overcrowded at time, especially in summertime. The silver lining is that you will always find company along the way.

Lugo is the capital of the homonymous province and, as a city with all sorts of services, it offers pilgrims everything they might need to get ready for their adventure. Moreover, in the last few years, the local governement has been directing many resources to promote this route of the Camino, especially now that the Jubilee 2021 is just around the corner.

After a few stages, this route joins the French Way, giving you the opportunity to meet and share experiences with other pilgrims that undertook this challenge from many other towns.

Even though Baamonde is a rather small town, it is exactly 100 kilometres away from Santiago However, many pilgrims choose to start a few kilometres before and set off from Vilalba, a bigger town with a larger offer of services and accommodation.

As you can see below, the first stage of this route if you start in Baamonde can be too long, exceeding 40 km, which not every pilgrim is willing or prepared to cover in one day. That is why it is often divided into two shorter stages. However, if you decide to do it in two days, plan it well and make sure you will have where to sleep, as the accommodation options are scarce. If you need, we will be happy to help you find a place.

This is the second most preferred route after the French Way from Sarria. Due to its proximity to the Portuguese border, Tui has been a very popular starting point for many years, which has helped the development of a solid infrastructure and services offer for pilgrims.

Unlike most of the other routes, the last 100 km of the Portuguese Way are usually done in 6 stages, instead of 5, which makes it a little easier for those pilgrims who wish to walk shorter distances each day.

Alternative along the coast

Something that not many people know is that the Portuguese Way offers an alternative course alongside the coast. If we just look at the last 100k, it is only the first two stages of the main route that would be replaced by just one stage in the coastal route. We would start in Vigo and, once we reach Redondela after 16 km, both routes continue together towards Santiago.

The Spanish town of Ferrol does not mark the 100 kilometres to Santiago, but it is the official starting point of the English Way., so-called because of the English merchants and knights that sought Apostle James’ blessing at the Cathedral of Santiago before embarking on their crusades.

English Way from A Coruña

Like the Portuguese Way, the English Way also presents an interesting alternative. The entire distance from A Coruña to Santiago is 75 kilometres, which is not enough not obtain the Compostela. However, the chapter of Santiago decided to give it to those pilgrims who complied with certain requirements, defined here: how to obatain the Compostela from A Coruña.

If you ever decide to undertake this route of the Camino, you will soon find out that it is not the busiest route, partly due to the lack of services and infrastrusture along the way. However, just like the Primitive Way, it is gaining strength thanks to the promoting actions towards the next Jubilee.

Although it is not marked in the map at the top of the page, there is another route of the Camino between the French and the Sanabrian Ways called the Winter Way. This route emerged as an alternative to avoid the high lands that are so hard to walk in wintertime when there is snow.

This course is usually completed in 4 long and rather hard stages, so if you are not well prepared, we recommend to divide them into shorter ones. Should you need help to define your itinerary, you can count on us to help you plan your experience.

IT IS TIME TO EMBARK ON THE ADVENTURE

Now that you have discovered all of the towns from which you can walk the last 100 kilometres to Santiago de Compostela, it is time to make it happen. Choose the route you fancy the most and live a unique experience. If you still have doubts or wish to receive a personalised proposal, we are here to help you.

We can fill you in, no strings attached!