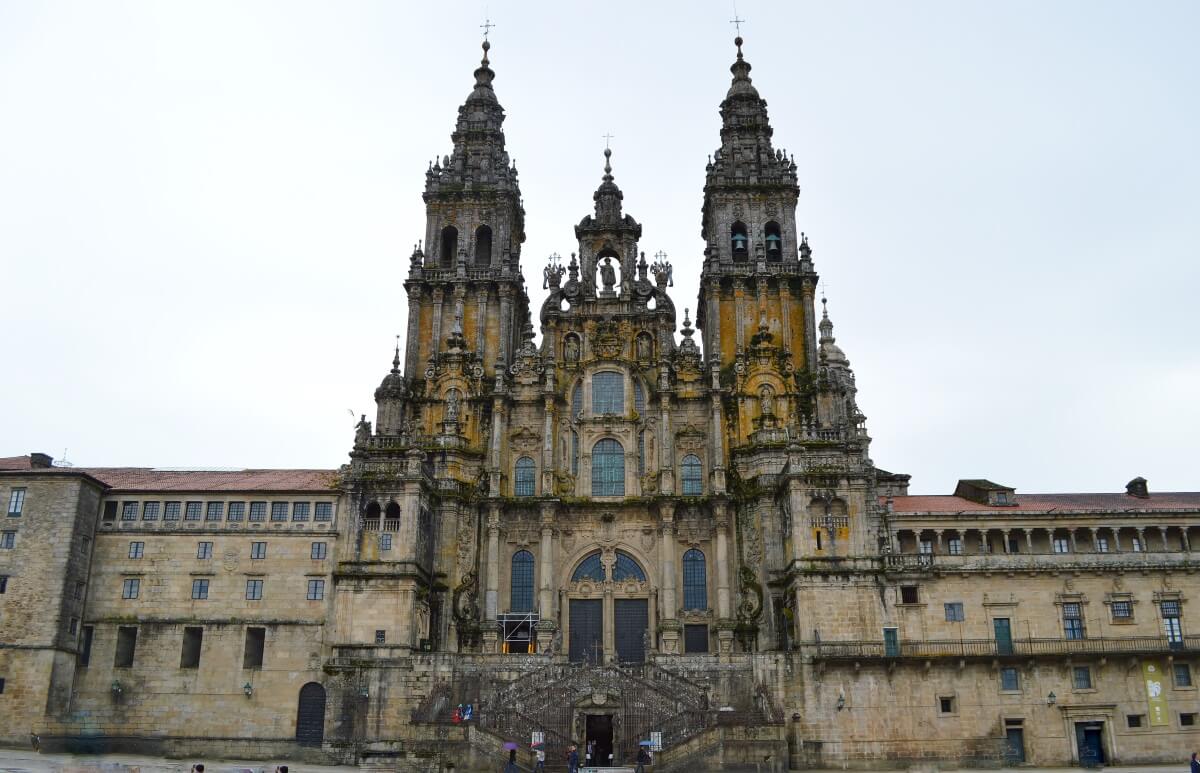 That’s the reason why thousand of pilgrims come to visit it every year, walking the different routes towards Santiago, on religious grounds or just to contemplate this architectonic jewel. The cathedral was declared Heritage of Cultural Interest together with the Santiago’s old town.

Also take a look at: What to see in Santiago de Compostela

The Apostle and the Cathedral

The remains of St James haven’t always been under the cathedral’s stones as many people wrongly believe.

After discovering the sepulcher, the Astur king Alphonso II commanded to built a small church made of mud and stones. And it was built exactly in the same spot where the marble altar made by the apostles was found.

The first temple was very modest, it had a small building with a colonnade and a portico made with granite flagstones

Subsequently under the mandate of Alphonso III, it was decided to enlarge the sepulcher due to the affluence of visitors. An annex bigger building was built surrounding the high altar.

Almost at the end of the 10th century,Muslim troops destroyed this pre-Romanesque work, Only the original sepulcher was miraculously saved, allowing thousands of believers to keep on visiting it .

Afterward, the Romanesque church was built, concretely in 1075 under Alphonso VI and Diego Peláez. The last one will be substituted by the well-known Diego Gelmírez

The construction was extended for many years. In the Codex Callixtus was reflected that the last stone was placed in 1122 From that moment on, Alphonso VI and the archbishop both worked together to encourage and promote the pilgrimage to this holy site.

Despite of its Romanesque initial style, in the 17th century suffered an important renovation being transformed into a Baroque style construction. The main changes were mainly made in the high altar and the dome. The popular Holy Gate and the Obradoiro’s facade was designed as well at the same time.

Inside,it’s divided into three naves surrounding a Latin-cross layout These naves are extremely long, around 20m or even 30m in the section open under the doom. So this Romanesque temple is consequently the biggest in Spain.

Regarding the chapels, they are scattered all along the cathedral. They are 16 and some of them remain proper Romanesque details They are located between the Girola and Crucero chapels with direct access to the Platerias Gate and Clavijo’s Tympanum.

Located inside we can find two of the most emblematic elements of the whole ensemble. The Botafumerio (thurible) which is purifying both pilgrims and visitors from the Middle Age, and The Portico of Glory ,a masterpiece made by Maestro Mateo between the 12th and 13th century.

Under the vaulted ceiling and millennial stones we can find the Museum of the Cathedral, the cloister of the 16th century and the crypt where we can admire vestiges from the Romanesque and Gothic. 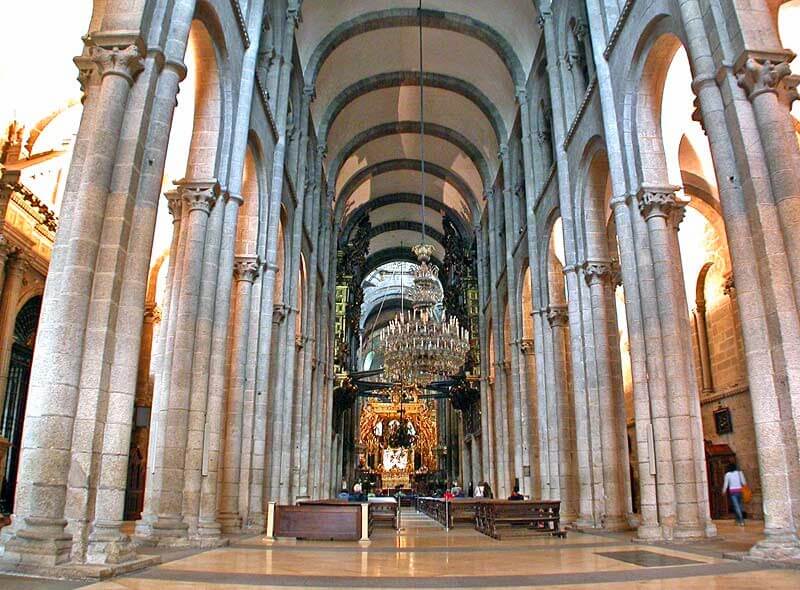 Outside of the Cathedral

At Platerías Square we can find the only Romanesque façade of the temple. The name of this square, alludes the trade made in this area ( Silversmiths) .

On the other side we can find The Quintana’s Square, lead by The Sacred Gate (Puerta Santa) and surrounded by both House of the Vine (Casa de la Parra) and the Quintana’s Convent.

Finally must be remarked that the cathedral is guarded by both the Immaculate and the Azabacheria Squares (jeweler), one more time the names selected refers to the area’s trades. Currently some of the are still located in the same place.

There’s another part of the Cathedral that must be highlighted: The roof You can access to visit this part booking a guided visit. The starting point will be at Gelmirez Palace Without any doubt, the breathtaking views from the top will amaze pilgrims and the thrill seek tourists. 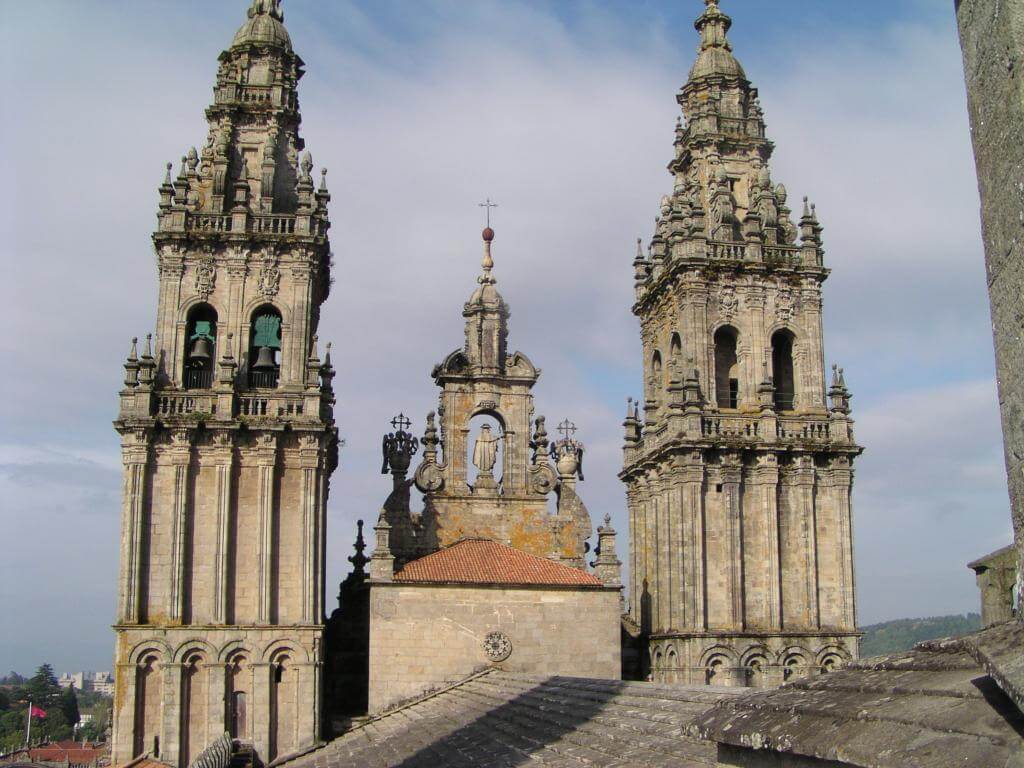 If you want to appreciate the majesty of the cathedral It is time to Plan Your Way. The longest the way is, the greatest the pleasure you feel when you arrive and finally contemplate the cathedral will be.

From 2019 to 2020 the interior of the cathedral will be unavailable due to the current restoration works on it.