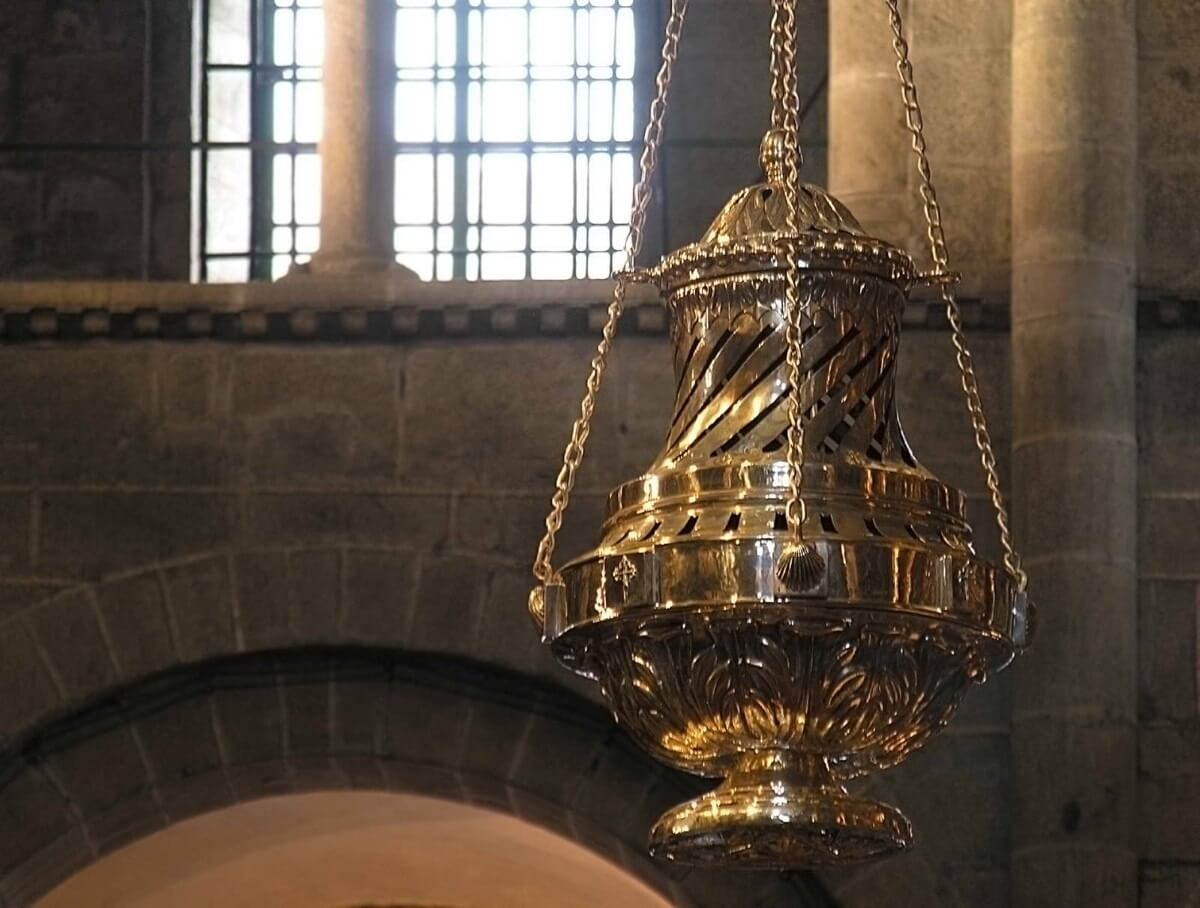 The first quote about it was in the Callixtus Codex under the name of Turibulum Magnum. This huge thurible is one of the most representative symbols in the Santiago’s Cathedral. It’s called Botafumeiro which literally means smoke expeller

Interesting Topics: How to spend your time in Santiago

We don’t exactly know when this ritual began, but the first reference could be found on an margin of the Codex. Despite of this, it is firmly believed that the origin could be even more ancient, around the 12th or the 13th century. The use was finally certified on the 14th century conceding in time with Apostle’s reliquary bust creation.

There’s another element that could help us to date back this huge metal censer: the dome. It is known that was built in the middle of the 15th century. A big pulley was installed around the beams , probably with the purpose of holding the Botafumeiro.

It was in 1554 when Louis XI of France ordered the construction of a great silver censer for the Cathedral, but this was unfortunately stolen by the Napoleonic army in the 19th century. This event forced to order a new one. This time would be a more humble and practical one to be easily used during worship services

What was the Botafumeiro’s purpose?

It was mainly used during special events to remark the importance of some worship services One of those important occasions was The Holy Year.

The current thurible was dated back on the 1851. In the opening ceremony they tried to bring back this abandoned medieval ritual . It was in the same year when was noticed for the very first time under the name of ” vota fumeiro” term used by Neira Mosquera in an article written in the Galaica Magazine That was probably an informal word, but that famous writer and reporter from Compostela was the first one using that term.

Two decades later, when the remains of the Apostle were found and the city of Santiago flourished again, a large number of pilgrims started to arrive forcing the use of this element which beautified the services as well.

How the Botafumeiro of Santiago de Compostela works

Due to its great size and weight( more than 60 kg and 1,60 m tall) is it required the use of big chains. This chains allow to throw it into the air describing an arc of 60 m wide and reaching a speed of 70 km/h

Its huge size requires up to 8 people to move it. These individuals are known as tiraboleiros. The tiraboleiros apart from moving this silver and brass giant, are in charge of moving it from the Cathedral’s museum (where is normally located) to the main aisle.

Once hooked, they have to fill it with incense and coal. The final step is to tide it up to the rope which will allow the swinging along the aisle One of the most spectacular moments in this process, is when they set it into motion, very slowly and taking advantage of the inertia thanks to the system based on ropes and pulleys

The tiraboleiros are finally in charge of stopping the thurible as well, by jumping on it to slow the speed it gained. 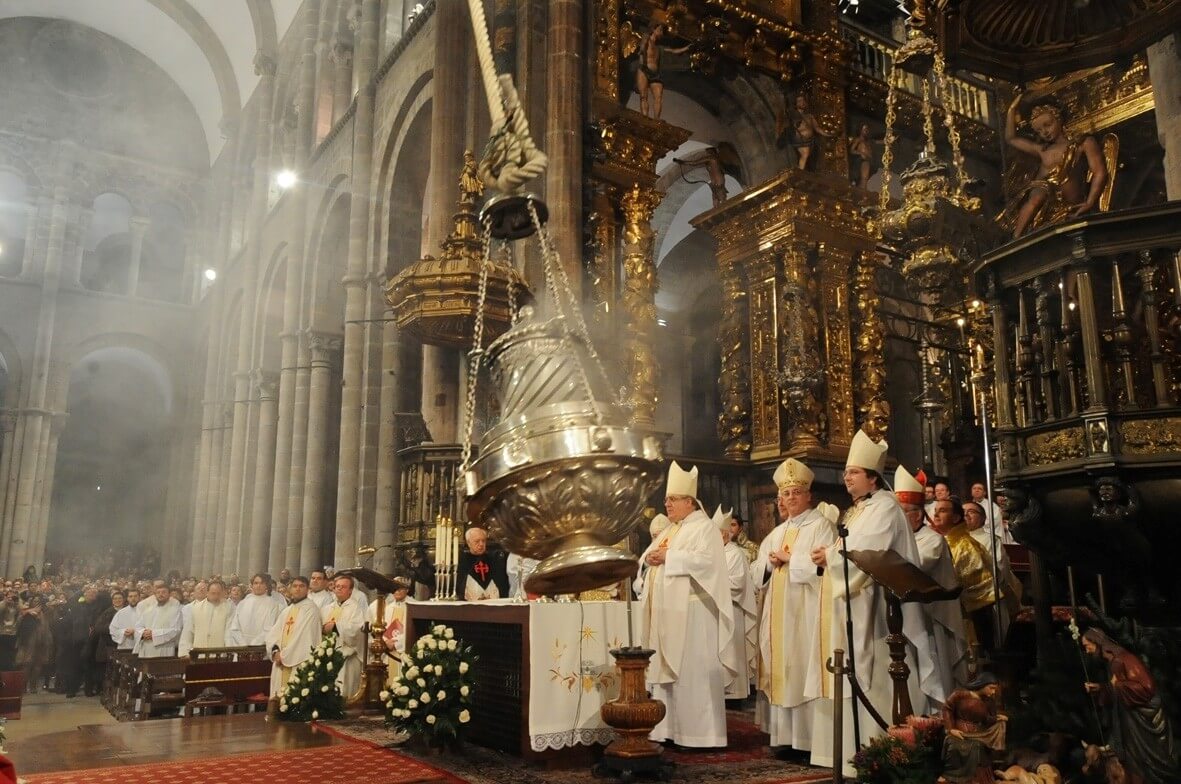 When is The Botafumeiro used?

Important Notice: Due to the renovations inside the Cathedral, The Botafumeiro will not be used again until further notice.

This special event will only be admired on a Holy Year or on special occasions such us:

If you cannot attend the Cathedral on the dates aforementioned, you can directly apply to the Cathedral for watching it. In that case you should pay a fee

Watch the Botafumeiro flying The cost of watching the Botafumeiro outside the scheduled dates will be between 400-450 €You’ll probably consider this service a bit expensive, but it is basically the cost of maintenance. Many pilgrims or associations use to save money for this purpose to ensure they can watch it flying.

To book a Botafumeiro’s Session you can send an e-mail to: botafumeiro@catedraldesantiago.es

Important Notice: Due to the restorations inside The Santiago’s Cathedral, the Pilgrim’s Masses will be moved until further notice to San Francis Church (12:00 pm) and St Fiz de Solovio Church ( 19:00 pm)

It is basically a ritual to welcome those pilgrims who have arrived to Santiago de Compostela, after finishing The Way of St James. During the worship services, all Pilgrims who have collect their Cosmpostela in the last 24 hours will be named.

Apart form the name of the pilgrims, will be related their nationality and when they have started their pilgrimage to the Cathedral.

The Pilgrim Mass will take place everyday in the main altar of Santiago’s Cathedral at 12:00 pm and 19:30 pm. Coinciding with the Holy Years, the number of pilgrims visiting Compostela tend to multiply the masses as well. 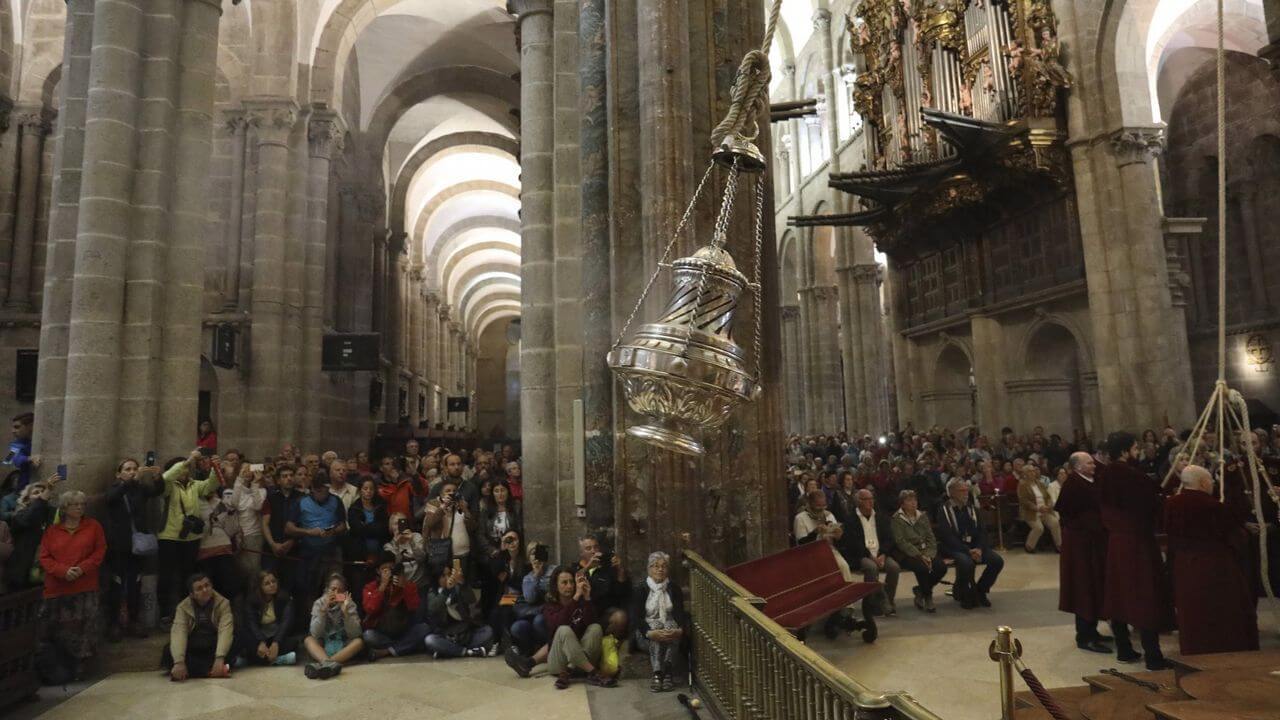 Common Accidents when The Botafumeiro is flying

During the Pilgrim Mass, The Botafumeiro could reach a speed of 70 km/h, describing an arch of 82 grades and 65 m tall. All of that implies a great danger in case of any collision or fall over the visitors.

Up to the moment , just 4 accidents have happened leaving 2 slightly injured people.

On that day, a mass for the Princess Katherine of Aragon took place on The Cathedral. While the Botafumeiro was flying , one of the chains broke. That caused the sudden expulsion of the thrurible crashing against the Platerias Gate No people were wounded.

Once again , the chains holding this huge silver Botafumeiro (given by Louis XI) broke causing a crash on the area where the “tiraboleiros” were located. No wounded people were fortunately found.

We know that at least two crashed were reported on this century , but no one know the exact dates.

Now you know the Schedule for the different Feasts.. Why don’t you plan your Way according to these dates?