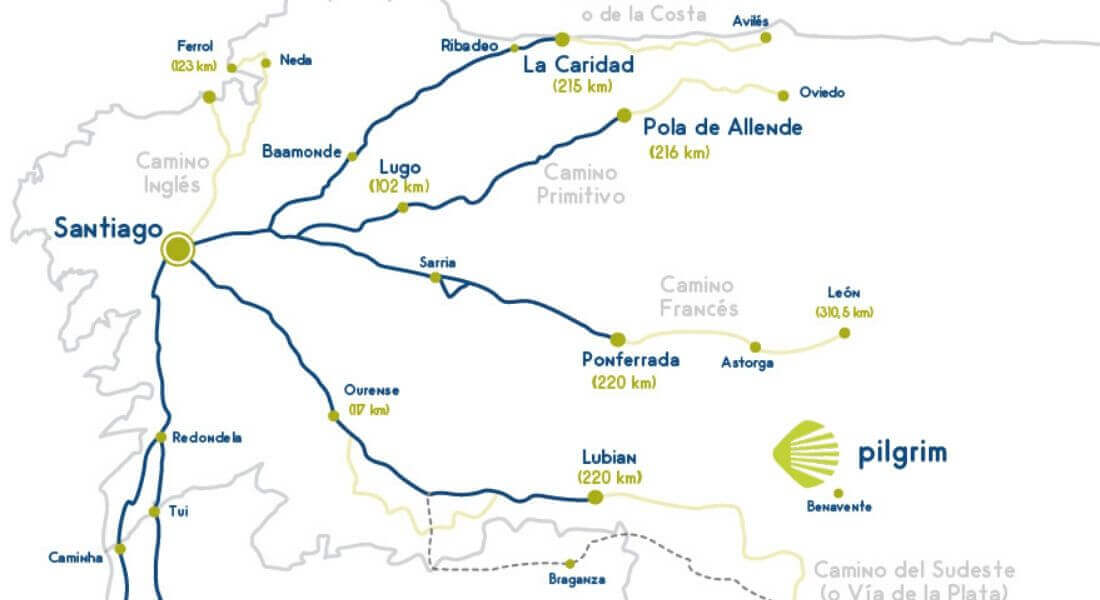 If you are thinking about cycling the Camino de Santiago, it is strictly necessary that you cover at least 200 kilometres if you want to obtain the official certificate of the Camino de Santiago. That is why we want to give you all the information about each starting point, depending on what route you choose, so you can accomplish that.

You may also be interested in: last 100k of the Camino de Santiago

There are 6 different routes where you can cover this distance: French Way, Primitive Way, Northern Way, two Portuguese Ways and Sanabrian Way. There are several other routes in the Camino, creating a vast network spread out across most of the Spanish territory. However, they either are secondary routes that do not end in Santiago or their length is shorter than what we are looking for.

MAP OF THE LAST 200K OF THE CAMINO

In the map below, you can see each of the 6 routes from their starting point to the finish point at the entrance of the cathedral of Santiago de Compostela. Further down, we will have a deeper look at each of them so you can decide which one matches better your requirements. 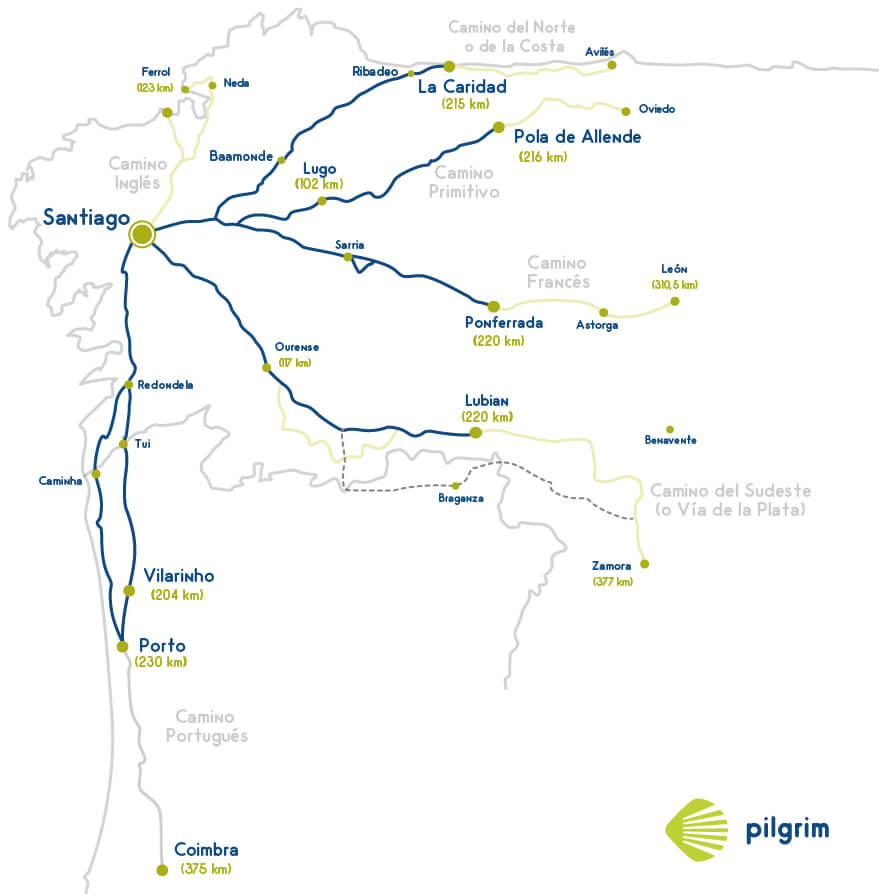 This is the most popular starting point amongst those pilgrims who opt to cycle the Camino. One of the main reasons for choosing this place is its profound history related to the Camino and the Templars, which you can find out more about at the Templar castle, the main attraction in Ponferrada.

See below for more information about our suggested stages for cycling this route, or click here to see the stages on foot.

This route is recommended only for those pilgrims physically well prepared who are looking for a challenge. The reason behind this is that the Primitive Way enters Galicia through high mountains that make the ride harder. It does not mean it is impossible, it just gives those eager to experiment the desire to exceed.

Find out below more information about our suggestion for cycling this route, or click here to see the stages on foot.

This starting point is just one stage away from leaving the Cantabrian coast behind and heading towards inland Galicia by the north of Lugo province. It is not especially hard but it does require some previous training, just as most of the routes.

See below more details about our suggested itinerary for cycling this route, or click here to see the stages on foot.

The Portuguese Way is the second most popular route, both on foot and bicycle. Therefore, there is a wide range of services and insfrastructure intended for pilgrims.

You can do the exact 200 km starting in Vilarinho. However, since it is a very small town with little accommodation and services offer, the vast majority of pilgrims prefer to start in Porto, adding just some 25 kilometres to their itinerary but enjoying one of the biggest cities in Portugal.

The course is rather flat, with very gentle slopes, which makes it a good choice if you have not had time to train.

See below our suggested itinerary, or click here to see the stages on foot.

There is an alternative route to the central Portuguese Way that runs alongside Portugal’s coastline. It starts in Porto too, but it diverts towards the seaside and continues alongside the coast until the Spanish town of Redondela, where both routes convey and continue together to Santiago de Compostela.

Find out our suggested stages for cycling this route, or click here to see the stages on foot.

The Sanabria Way is not the best known route of the Camino de Santiago. However, it is just as impressive as the other routes. The only difference rests in the fact that, due to its lower popularity, it does not offer the same infrastructure in terms of services or accommodation as the French or Portuguese Ways.

Its course runs through southern and inland Galicia, starting in Castilla y León, just a few kilometres away from the limit between both regions. This route does not present major difficulties, although a bit of previous preparation is recommended.

See below our recommended stages, or click here to see the itinerary on foot:

IT IS TIME TO EMBARK ON THE ADVENTURE

Now that you have discovered all of the towns from which you can ride the last 200 kilometres to Santiago de Compostela, it is time to make it happen. Choose the route you fancy the most and live a unique experience. If you still have doubts or wish to receive a personalised proposal, we are here to help you.

Enquiries are welcomed and without obligations.