A Jubilee Year is also known as A Holy Year and we can find its origins in the Law of Moses. The word “jubilee” comes from the Hebrew word “yobel”.A music instrument shaped as a horn and used to communicate good news.

Check also other topics: Important Symbols in The Way of St. James.

According to The Old Testament, A Jubilee year takes place every fifty years according to the Jewish Tradition : sins must be forgiven, lands should be back to the owners and slaves should be free.

This tradition comes from The Moses’ Law: Lands should be grown for 6 years and resting on the 7th, turning this year into a Sabbatical one. After seven repetitions, that is 48 years, the next year number 49 would be sabbatical again and year number 50 A Holy Year.

What is the Jubilee Year?

In this special year, people from upper classes should condone their serfs’ debts and set their slaves free imitating the Jewish rules.

According to Leviticus 26:1-17.It is a gap year to return those lost things to their proper owners. and where no one should neither grew or reap the land nor pick the grapes.

Evolution of The Jubilee Year

The Catholic Church modified afterwards this tradition, giving a more spiritual sense. Instead of returning lands and possessions to those who have lost them, all Catholics will apologize for the sins committed renewing vows and finding God again.

In the year 1300, Pope Boniface VII established the following rule: The Ordinary Jubilee Year will be every 10 years. But just 50 years later, Pope Clement VI invoke A Holy Year in advance, due to the tragic events in Rome: Swine fever , earthquakes and army confrontations.

Finally a period of 25 years was established. This gap was settled calculating the possibility of celebrating a Holy Year at least once in a lifetime.

Despite of this, Pope Callixtus II granted the following privilege to the city of Santiago: Will be A Holy Year every time the 25th of July falls on a Sunday.

On a Holy Year The Inaugural Ceremony takes place on the 31st of December by Opening the Holy Gate. In this event the Archbishop knocks three times from outside asking The Apostle permission to get inside the Temple. This Gate is located in the famous Quintana Sq on one of the Cathedrals corners 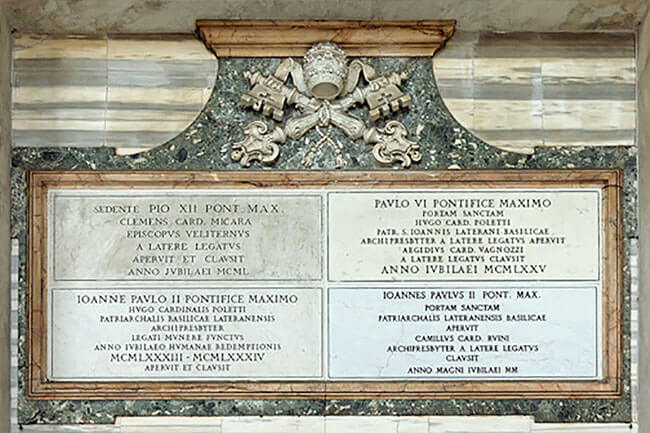 The requirements to apply for Forgiveness on a Holy Year have been changing along the time. Nowadays walking dozen of kilometers is not a formal precondition to obtain the Forgiveness from God. But visiting the Cathedral to honor St James Apostle is an essential requirement, as well as receiving The Communion and the Sacrament.

Apart from Santiago the are more Temples which can show indulges and pardon. There are 5 temples around the world authorized to proclaim The Jubilee .In Spain apart from the one in Compostela , we have two more temples: Santo Toribio de Liébana and Villafranca del Bierzo; The other significant ones abroad are Jerusalem, Rome and Caravaca de la Cruz

The Jubilee is not a religious event only for the catholics. It tries to be an event to join and fraternize with the Jewish, the Hebrews and the rest of the other catholic religions.

Here you can find a table with the periods from 1909 to 2094. Please make for future plans.