You will start this stage in the Iglesia de Santa María church. And then you will continue through some streets such as Sotier de la Mier, Gregorio Uzquiano and the Avenida Carlos VII where you will get to a bike lane that you will have to follow until you get to Pobeña. After crossing the dual carriageway you will return to the bike lane, where a little bit after you will see how much kilometers are left to get to the Playa de la Arena beach, 10 kilometers. You will continue through the asphalted road accompanied by the Montes Serantes mountain, on top of it you will see a fortress built by Fernando V during the War of the Spanish Succession; then you will get to a neighborhood called Gallarta. You will get to a museum devoted to the mining industry that shows that all this area used to be a place was an extraction area, especially iron. A little bit after you will have to cross again the dual carriageway through an underpass, leaving the bike lane for a while.

Finally, you will get to the Playa de la Arena beach and then to Pobeña where you should continue through the left side of the road, cross a picnic area and get to the Ermita de Nuestra Señora del Socorro hermitage. This temple is from the 18 century, Capitan Padro de Llano promised to build it if he survives to a storm while he was traveling from Havana to A Coruña. There are lots of pilgrims that decide to stay the night here in the hostel (just open in summer) or in another kind of accommodation. If you decide to continue to Castro Urdiales you have to know that there are approximately 23 kilometers left. To continue you will have to go through the staircase to get to the train rails that used to be used to carry the iron to other cities in Europe. Then you have to be careful and pay attention: cyclists should go to the left and walking pilgrims should do through the right. You will see a picnic area and also a parking and you will have to continue on a path towards El Hoyo. . You are now in Cantabria, you will get here through a tunnel called Piquillo that is a dual carriageway’s underpass. After crossing this tunnel you will have to turn right to go towards the Sabiote river, where you will have to go to the left to get to Ontón. On your way you will go through Baltezana and Otañes, that is the official route (a little bit longer than the alternative one): now you just have to continue through the national road and after going through a staircase you will get to Castro Urdiales, just after 10 kilometers. If you continue through the original way you should add 7 kilometers more. The Original way goes on a road to get to the Sabiote river that will lead you to Baltezana.

After leaving this village you will also leave the road to go through a path that will take you to the river and then again to the CA-523. A little bit after you will leave the asphalted road to get to a path cyclists should continue through the road, you will get together in Alto de la Helguera, then you will have to descend through the slope. You will go through Otañes, a village famous due to its mounts. After some kilometres you will have to walk through a path called Castro-Traslaviña that used to be a train rail that linked Castro Urdiales and Traslaviña. You will go through Otañes, a village famous due to its mounts. The next neighbourhood that you will cross is Los Corrales, just before getting to Santullán and turn left to get again to the road. Then you will go through the Iglesia de San Julián church. Parallel to the temple you will find a street that get again to the road, where you will have to turn left to get again to the Suma river. Finally you will get to Sámano a village that belongs to Castro Urdiales famous because here is located a cave called Juan Gómez. During the 70s, some figures from the Paleolithic Age were found in this archaeological site There is also a fort or “castro” declared of Cultural Interest. After crossing the Iglesia de San Nicolás church you will have to turn right to Llantada, where you will cross again the river and also a neighbourhood. Always following the CA-520 to get to Castro Urdiales. You will have to cross an underpass and some roundabouts. Once you get to a petrol station you will have to turn left and then cross the river again to continue through the fluvial path called Ocharan Mazas. You will get to the port and to the Iglesia de Santa María de la Asunción church a gothic temple from the 13 century near the sea. Unfortunately, it suffers from the so called “stone disease”, and the stone of its construction is already turning into sand. Inside there are some wonderful paintings and sculptures. The local hostel is approximately located one kilometer and a half from the city centre.

We walk by your side! If you have any doubts about this stage or about other stages, please contact us, we will help you. Have a nice Way, pilgrim!

The small way to Pobeña is very easy. You will have to deeply think about the options that you have once you get to La Helguera. The official way is harder than the alternative one. The national road is a good option to make the distance between both villages shorter. 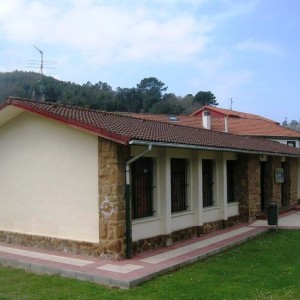 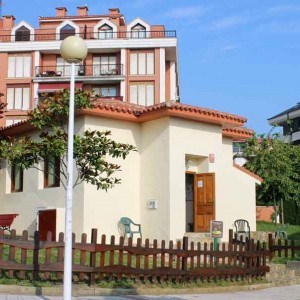