We leave behind the Maragateria capital to deal with a new stage with two main different parts. The first kilometers are a sequence of typical villages of the Castilian plains, framed in the Somoza or Country of the Maragatos. We will walk among ashlar buildings and rests of the old muleteers, those who would transport goods throughout the mainland with the help of pack animals. However, in the second part of this stage, we will change the plains for the climb to the Bierzo region, through León mounts.

We now leave the city through Saint Pedro street, towards Castrillo de Polvazares on Mártires street. Passing by the Ecce Homo shrine, we must cross the A-6 through a flyover, to take a parallel path to the LE-142 road, which we will cross in more occasions and that will take us to our destiny: Murias de Rechivaldo.

We will cross this village and its river Jerga through a lateral street, where we can taste some of the typical dishes of this area. We will take again the path we left behind before entering Murias, towards Santa Catalina de Somoza. Only a half an hour later we will see Castrillo de Polvazaras to our right. This village is just a kilometer away of the Way of Saint James, so some pilgrims go there to enjoy its architecture. Its inhabitants were originally muleteers that would take advantage of its strategic placement. Joining Galicia with the rest of the Spanish mainland, they would facilitate the merchandise transport between these two areas. They would mainly move salted fish to the inland and cold meats and dry farming to Galicia. If we eventually decide to visit the town, we must walk on the LE-142 road and then take an exit through a dirt road to link again to the path that will lead us to Santa Catalina de Somoza.

Moving forward in the main route, we will go on through the path parallel to the road, where we can have an idea of the ascending we have next. We will walk through a slope, but a soft one. After passing by a recreational area, we must pay attention as the way will be divided into three. We must take the diversion to the right, that will lead us through a dirt path to Santa Catalina de Somoza. We will cross along Real street to return to the road. About four kilometers forward, we will find a monument dedicated to a deceased pilgrim turning to the right towards a village called El Ganso.

The Cowboy Tavern will probably call our attention in a place full of holm oaks and old houses. This is a very particular place where we can eat and drink something before moving to Rabanal.

We will turn immediately to the left to pass by a church dedicated to Santiago, and then take again the dirt road that will ascend progressively. After passing the Rabanal Viejo diversion and the stream of Reguerinas we will ascend through a path among oaks. A wall decorated by those pilgrims who follow this route ill be the perfect signal that we are following the right way.

We will have to put a step again on the road before entering Rabanal del Camino, taking the diversion to the right across Real street. This village was considered the end of the ninth stage, as indicated by the Codex Calixtinus. For this reason it had many hospitals and pilgrims centers through history. Currently, it has different hostels and establishments oriented to the Way of Saint James. It is also remarkable its small but interesting church, that belonged to the Temple’s Order.

We will go on towards the outskirts and, at the level of a public wash place, we will take a dirt road. After ascending for a little, we will find again the paved road, which we will cross to take another wider path to deal with the last kilometers. We will be now approaching Bierzo’s mountain. After descending through a path that will take us to the road, we will reach Foncebadón, practically abandoned until the end of the 20th Century, when thanks to the Way of Saint James some establishments appear. Centuries ago, this place enjoyed a remarkable importance due to the existence of a monastery, but its inhabitants left little by little. Currently, it is inhabited by less than ten people.

Despite walking through lonely places, remember that Pilgrim will always be by your side guiding you an helping you in everything you need. We walk by your side!

Despite having some ascendant sections, they will not even be appreciated by most pilgrims. They will only become a little harder right before reaching Foncebadón. Cyclists nor people with reduced mobility will have any problem when walking the distance between Astorga and Foncebadón, except by loose rocks. However, cyclists can take in the last kilometers the LE-142 road at the crossroad when leaving Rabanal to the right, as the narrow path where the Way goes originally one may be a little difficult for them.

Some pilgrims choose to pass the night at Rabanal del Camino, where they can find all the services they need. Foncebadón can be a little desolate due to its current abandonment. 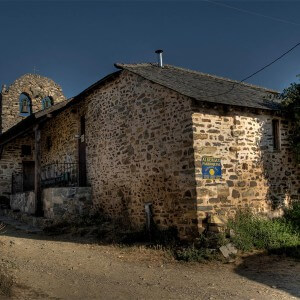