Saint Jean Pied de Port is the second most popular starting point in the French Way. This old fortified town is surrounded by great mountains being the meeting point for different Ways: Arlés Way, Lepuy Way,Vélezay Way and Piamonte Way.

Those looking for a starting point beyond the spanish border, must know they will face one of the hardest stages along the Way For almost 25 kms you will have to climb over 1,250m up (3,937 feet) between Saint Jean Pied de Port and the Puerto de Lepoeder known as the Napoleon route to the Spanish territoty entrance, However all this effort won’t be futile as you’ll be awarded with the Atlantic Pyrenees awesome views, plus the satisfaction of surpassing the border following Napoleon Bonaparte steps.

We will start this first stage by crossing Santiago’s Gate, a traditional pilgrim route towards Roncesvalles, declared a Unesco World Heritage in 1998. It is located on the highlands and connects the following streets: Chemin de St Jacques and Rue de la Citadelle. After crossing this path, we will penetrate into the historical Rue D’Espange across the bridge over the Nive river, where traders and craftsmen used to bargain. After enjoying this path we’ll abandon this fortified town, leaving on the left side the old Citadel from the XVII century located on the Mendiguren’s hill Right in this spot we can find the first signal on a wooden post: Saint Jacques de Compostelle path, known as Napoleon rout as well. Following this pavement road, another yellow post will show us an alternative stroll on the right side marked in green: Arnéguy and Valcarlos Way. This path is specially appropriate for those harsh weather days, due to the light slope (895 m / 2936 ft) as opposed to Napoleon’s route. This diversion is recommended in case of travelling in wintertime so we can avoid any accident caused by rain, fog or snowfall usual in the season. This “shortcut” will directly lead us over pavement roads to Roncesvalles, crossing Valcarlos where Charles the Great camped after being defeated on Roncesvalles Battle.

In case you have decided to follow the Napoleon’s route, it’s good to know that here is where all difficulties begin Several steep paths on the trot will force us to calm down. It is highly recommended to leisurely walk, so you can enjoy the surrounding green landscapes. After crossing 5 kilometers (3 miles) of hard slopes we come across a village called Huntto It is a great place to rest for a while, drink and have a snack to face the following 19 kms (12 miles) in the best possible way. We leave the pavement road behind and we take up again a ground and steep slope towards a viewpont. From this spot you can observe the route left behind and enjoy reading a fragment from The Callistine Codex located on a notice board. Just 1 kilometer (0.6 miles) up ahead we can stock up on, in case we need I, at Orisson’s shelter, as we won’t have a chance until we reach Roncesvalles..

After 4 kilometers (2 miles) surrounded by green meadows and Manech sheeps (Typical dairy sheeps from the Pyrenees that will walk with us along the way) as well as wild horses, we can make an offering to Biakorri Virgin. After another 4 kilometres (2 miles) full of green fields with Manech sheep (typical sheep from this region) and also wild horses, you can also make an offering to Biakorri virgin. If we have changed our mind and decide to take Valcarlos route, we can take Arnegi path, on the right side of the road. In case we follow the regular path, we will leave the pavement road in about 2 kms ahead. The Roncesvaux/Orrega signal (km15) will lead us to go down towards Benavente Hills. Just 600 meters (1,968 feet) ahead across the hill, we will leave on the left hand another offering monument Thibault’s Cross, to penetrate on a leafy beech forest going down Benavente and Roldan’s Fountain. A monolith sing informs us we are pretty close to the border: We have entered in Navarra In short, we’ll take a diversion to the left, going ahead Izandorre’ Shelter and just a couple of kilometers later will top Lepoeder’s Hill at 1.430 m high (4.6 ft) It is recommended to stop here and make the most of the awesome view of the valley, we are only 4 kms (2 mi) away from the end of this stage.

Roncesvalles is at our feet and one more time we have two different options to take: The shortest one with severe slopes or the longest one throughout Ibañeta’s Path. If we divert our route to the left, we’ll take the shortest path, but it’s not recommended on a foggy day or for those with heavy burdens, due to the steep slope.. This way we’ll directly walk the 3.5 km (2.1mi) left to Roncesvalles. On the contrary, if we choose the longest option and the safest, we’ll go down 4 kms ( 2 mi) where the legend places Roncesvalles’s Battle: Ibañet’s Top. This hill is known as Pyrenees’ Door for being the connection between the Peninsula and the resto of the continent. This “Gate” was used not only by pilgrims but for thousands of prehistoric inhabitants, shepherds, Celts, Romans, Barbarians, Muslims, Napoleon’s troops and a never-ending number of walkers throughout the years San Salvador’s Chapel has also thousand of years of tradition behind it, incarnated on an old monastery use to assist medieval pilgrims from the 11th century. We’ll finally reach Roncesvalles Port accompanied by breech trees and the sound of Otezul river .

We walk by your side! If you have any doubts about this stage or any other ,we can help you.Please contact us. Have a nice Way, pilgrim!

As mentioned, this is one of the hardest stages along the Way so please take as many precautions as possible. If you are not fit as a fiddle or if you have any mobility problems, we highly recommend you to take the Valcarlos diversion. Its pavement road will directly lead you to Roncesvalles avoiding any suffering caused by the slopes

This advice is also for those who ride on a bike as they will have to burden it due to the steep slopes. The ones who has chosen this alternative must bear in mind that a high percentage of the route will be ridden on the roadside ( N-135), so all feasible precautions must be taken to avoid any accident. Cyclists should be careful when descending Bentarneta Mountain. It is recommended to take the longest signposted route towards Ibañete top.

For those without a proper fisical training it is recommended to start the route from Roncesvalles. 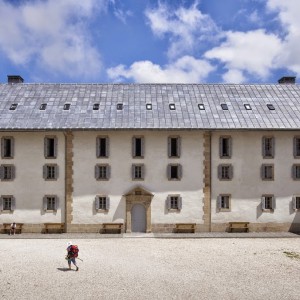 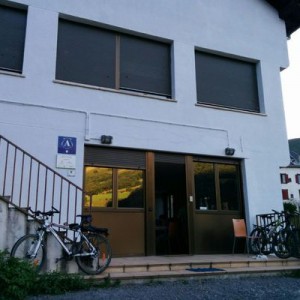