Now you are deep inside the Castilian landscape full of huge plains and cereal fields. The climate is extreme in this area: if you are traveling in summer temperatures are too high and there is no shade; in winter, there are strong winds and maybe snow.. All the villages that you are going to cross are really lovely

Now you will leave the city and also its majestic cathedral: Catedral de Santa María cathedral through the Calle de Fernán Gómez. You will cross the Puerta de San Martín door such as the medieval pilgrims used to do. long time ago this arch used to be called Puerta Judadera because it was located in the Jewish neighborhood. After crossing this arch you will turn left through the Calle del Emperador street and a little bit forward you will turn left again.

You will continue through this street to turn left again through calle de Villalón street that will lead you to the Arlanzón River. You will continue through the right side of the river and also cross the Parque del Parral park crossing the amazing Universidad de Burgos University that used to be a hospital. This hospital used to be the most important pilgrim’s hospital in the Way. Este edificio institucional en la antigüedad representaba uno de los hospitales de peregrinos más importantes del todo el Camino. Alfonso VIII of Castile ordered the construction of this hospital in the 12 century.

The way goes through a path under the railway track, then you should go through the left and after a flyover you will turn left again always parallel to the national road. You will cross the Puente del Arzobispo bridge where according to the legend Alfonso VI of León as Castile fell into the river while he was pursuing a group of enemies. Now there is just one kilometre left to do our first stop: Tardajos. Here it is located the Doebrigula site that was a city during the Roman Empire and that after was abandoned. You will cross this old city through some of its streets such as Mediodía, plaza Leandro Mayoral and Real Poniente. Now you will return to the national road and always going through its left side. Then you will cross the Urbel River. Just two kilometers after you will get to Rabé de las Calzada.

You will get to its center going through the Calle de Santa Mariana Street and then you will get to Plaza de San Francisco Riberas square where it is located a hostel full of history. After having a walk through this medieval streets you will do the last and the hardest part of this stage. There are just a few kilometers left to get to Hornillos del Camino. Nevertheless, you will find a spring called Praotorre. After a little ascend you will descend through the Cuesta de Matamulos street. After crossing a road and the Hormazuela river you will get to Hornillos del Camino.

We walk by your side! If you have any doubts about this stage or about other stages, please contact us, we will help you. Have a nice Way, Pilgrim!

This is one of the largest stages in the French Way. Some pilgrims decide to divide this stage into two, finishing in Hornillos del Camino where you will easily find accommodation to stay the night.

In this stage, people with reduced mobility will have many problems because there are some dangerous points. We recommend them go to Rabé de las Calzadas and the go in any kind of transport. For cyclists, there are some parts that are a little bit complicated and sometimes they will have to walk instead of pedaling. Tampoco es una etapa fácil para ellos.

f you are traveling in summer you should know that is very important to keep sun cream, water and a hat because maybe temperatures are too high, and there are not too many shades. If are traveling in winter you have to be careful because it’s too cold and you will need a raincoat, waterproof boots and warm clothes. 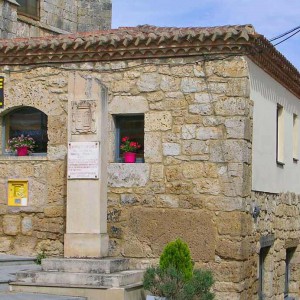