You are close to Costa da Morte and also to the famous Cabo de Fisterra cape that was considered the most occidental part in the world during the Roman Empire. But first, you will have to cross more villages and small villages to get here. Once you have crossed Hospital you will have to make a decision: go to Fisterra or to Muxía. You will also go through Cee and also through Corcubión. From this village there are just 15 kilometers left to get to the end of the stage.

It is a long stage, so you can divide it into two, staying the night in Corcubión, after Cee.

You will leave Olveiroa through the same street where the hostel is located, going through the right through an asphalted road. After some meters, you will find a marker and you will have to turn left towards a small stream. After crossing you will have to get to a path that will lead you to the Embalse de Castrelo reservoir. Then you will have to walk up through some paths in the Monte do Sino mount following the indications of the markers. Your companion at this moment will be a lot of windmills, after two kilometers and through the same path you will start to descend to get to the river located in Hospital you will have to cross it through a stone bridge to get to Logoso. After four kilometers walking you probably will need to stop and rest or eat something, or maybe buy some snacks because until getting to Cee you won’t find any establishments. Now the road gets to a roundabout and then you will find a marker that will indicate you that now there are two possible routes: Muxía or Fisterra. You will have to continue to Fisterra going through the left, a few meters after you will have to leave the road’s hard shoulder to get to a path through the right once you have crossed a curve. Near the way, but not going through it, you will find a petroglyph called Pedra Ancha, located in Buxantes. It shows the image of a battle. If you want to see it you will have to take a turn away from a factory called Ferroatlántica. You will also cross the Cruceiro de Marco do Coutostone cross that is located between Buxantes and Dumbría. Lots of pilgrims leave stones there. Now there are just two kilometers to get to the Santuario das Neves sanctuary near the sea and close to Monte Pindo. This hermitage is from the 15 century. If we cross to the other side we can rest in an area with tables where we can leave our bags, though there will not be many shadows. There is a spring called Fuente Santa that according to the legend is good for those mums that are breastfeeding. After stopping here you will continue through the Montes de Pedras Loiras mount and then through Cheda mount, this time you will be walking through uncomfortable paths that could be complicated to cyclists. The next temple is San Pedro Mártir, here you will also find a spring that according to the legend has healing powers. In this area you will find lots megalithic settlement and burial mounds hidden in the forests.

Moving on with the Way and about 2 kilometers and a half later,there is a signal telling us about the Armada cross. We recommend you this diversion of no more than 200 meters to enjoy all the beauty of Costa da Morte and Cabo Fistera, considered by Old Romans the most occidental part of the known world.

We now retake the Way after this mandatory stop overcoming a negative slope with an irregular terrain. When reaching a small altar with a Virgin, we will search for a paved road and turn first to the left and then to the right towards Os Camiños Chans. The hostel is on a diversion to the left, but if we want to walk on we must turn to the right, entering the village of Cee, where we will find all kind of services. In case we want to move on to Corcubión, we just have to go to Magdalena street and leave the promenade. From there, we will walk straight to Corcubión.

If you decide to continue to get to Fisterra you will have to walk from the Plaza de Castelao square to get to the Calle de San Marcos street where you will find a gothic church. You are now closer to Fisterra, so you can stop here to taste and enjoy Costa da Morte. After crossing the streets called Mercedes and Campo do Rollo you will get out of Corcubión and you will have to walk up a little bit to get to a viewpoint where you will see Cee and Corcubión estuaries. After crossing Vilar you will have to cross the national road. Then you will cross San Roque hostel that will be the starting point for those people who decide to stay the night in Corcubión. You will leave the asphalted road a little bit after, through the right, through a path full of pine trees, but then you will return to the asphalted road. Where you will walk through the left side up to a curve, where you will cross to get again to a path. Before getting to Fisterra you will have to cross Sardiñeiro. Once here, we will take a diversion to the right and then to the left, as a yellow arrow painted on a house wall will show us. We will continue our way crossing many streets to finally get to Fisterra. A hard descending slope will take us to Talón beach, frequented by the people of that place. Those who want it can go down to the sand, if the weather is nice, or to continue parallel through the Way of Saint James, leaving the place behind. A bridge will take us to the promenade until San Roque’s neighborhood and Baixar cross, where you will have a good view of Fisterra and its beaches. Moving on, we will link with A Coruña avenue, that will take us to the city center through Santa Catalina and la Real street, where we will find the municipal hostel.

We must not stop now, as the best is still to come: to climb for about three kilometers to Fisterra lighthouse. From Real street we will go through Constitución and Ara Solis squares until the road that lead us to the lighthouse. We cannot leave without seeing Nuestra Señora del Buen Socorro and Santa María das Areas churches, a little forward. From here, we only need to go on through the road until this lighthouse, which has being lightning the way to sailors from the 19th century.

We recommend you to divide the weight on your bags during those stages with hard slopes. We walk by your side! If you have any doubts about this stage or about other stages, please contact us, we will help you. Have a nice Way, pilgrim!

There are some parts of this stage that could be a little bit complicated. You have to take into account that there are not any available service between Logosto and Cee. 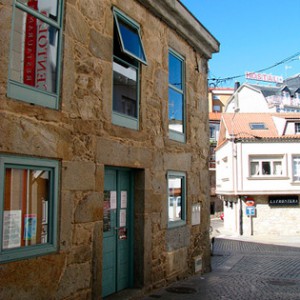 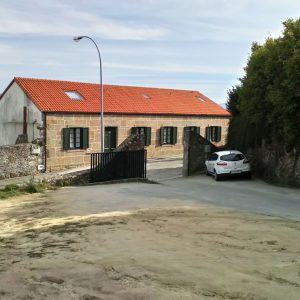