Along this section you will encounter the valley of the River Oria, whose landscapes are worth seeing. Given that this area has always been an important route of communication, it is more industrialised than the previous areas. Therefore, during this stage, you will pass through more than one industrial estate.

The stage begins in the autonomous community of Aragón, heading towards Candanchú. Next to the road, there is a trail, where you must be careful as there are some very steep slopes along the descent. After a short time, you can see the remains of the Old Santa Cristina Hospital, where pilgrims from other times, stopped and rested. The trail continues on as far as the Candanchú ski station, where further ahead, you should cross the River Aragón across the Puente de Santa Crstina, following a path with a slight incline. Passing the national road N-330, we change to a trail that is not so well-preserved, that crosses through a forest of pine trees. We can see the Fuerte de Coll de Ladrones before arriving to Canfranc Station, near the southern side of the old railway tunnel of Somport.

To leave the village, you must go along next to the tunnel of the national road, crossing a colonnade. Further ahead, we cross the River Aragón again, just on the opposite side of the Torreta de Fusileros. We can visit this monument, but it would mean taking a detour that later on we could regret. If we decide to continue along the way, we should cross the River Aragón again to arrive in Canfranc.

Leaving the Chruch of the Trinidad on the left-hand side, we leave the village, crossing the River Aragón over the Puente de Canfranc Bridge. Later, the path will force us to go along the national road two times, always next to the river. In this way, we arrive to Villanúa, where you should decide whether or not to continue along the camino, or to make a brief stop to make the most of the services of the village on the left-hand side.

Continuing along the path, we should once again cross the River Aragón, until crossing the national road and thus reach the motorway to Aratorés. Going down this road, the moment will arrive when we have to turn right and then continue straight ahead until reaching Castiello de Jaca.

We should take Lizeaga Street in the Elizatxo neighbourhood in order to descend to the A-15 motorway. Then, we turn right, and later to the left, towards some tracks that we will cross in order to continue our walk alongside these same tracks, which go in the direction of Urnieta. Once we have passed the Igarategui industrial estate, we follow the path until we near Geltokia station.

We continue on until we pass the Erratzu industrial estate, in order to go through yet another industrial estate, called Leizotz, in the direction of Anodoain. When we arrive, we go as far as Goiko square and then continue along Nagusia street, passing thorough the streets named Juan Bautista Erro, Kaleberria, Zumea, Larramendi and Karrika, in this order, until reaching Casa Izturitzaga. From here, we head along Gumerdia street, towards the River Oria, and cross it in order to skirt around the neighbourhood of Sorabilla. Once again, our path takes us through several industrial estates, namely Urtaki, Algaraitz and Ibalondo.

This way, we reach Villabona and continuing parallel to the river, we will reach the moment where we should cross it, at Irura, heading towards Anceta. A few metres after the exit, we will cross the railway tracks and, right next to the river, we pass through the last industrial estate to reach the end of this stage, Tolosa.

Being a more industrialised section, it also has a lot more traffic than in previous areas, so take extra care with the roads and crossroads.

This stage is very easy for cyclists and people with physical disabilities as it is practically all flat and without any particular complication along the way. 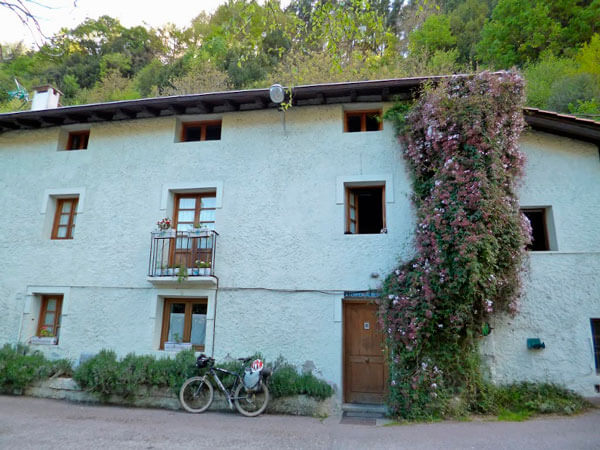