On this day, the ascent to Mount Faro, more than a thousand metres above sea level and the natural border between the provinces of Lugo and Pontevedra, stands out. This effort will be rewarded by spectacular views, being able to see in the distance all the great Galician mountains (Courel, Peña Trevinca, Os Ancares, Cabeza de Manzaneda and Farelo).

We start this seventh day leaving Chantada behind by the regional road, specifically saying goodbye to this city by the Plaza de Santa Ana and then linking with the street Uxío Novoneyra. After a few metres, after taking the road, turn left and pass in front of another dungarees.

The first towns we will pass through will be Centulle and Casasoa, separated by a short kilometre. Surrounded by small houses and granaries, we will leave the latter crossing the road that joins the cities of Ourense and Lalín and after about one hundred metres we turn left onto a dirt track. For those who wish to continue on asphalt, they can do so by following this road straight on. The path crosses a little further on with another regional road, which we cross to connect with the dirt road, in the place of Boán.

Always continuing straight ahead, we will quickly reach another small nucleus, in this case that of Lucenza. We cross it and a yellow arrow tells us that we must turn, at a point, to the right to return to the asphalt for a few meters. A little later we will have to take another detour to intersperse dirt and road tracks for the next few kilometres. We continue ascending slightly until we reach Penasillas, a perfect place to make a stop in its small square, surrounded by a modest stone chapel and again another dungarees of souls, in this case larger than those seen in previous days.

It is better to get your strength up because the ascent to the hermitage of Nuestra Señora de O Faro begins now. After another road crossing, we continue straight on along a path with a steep positive slope and after about two kilometres along forest tracks we will hit a road, just at the height of a stone monolith in honour of the poet Pablo Rubén Eyré. We continue up it for a few more minutes, to turn left a little further up the “Camino de la Virgen” (Way of the Virgin), which will lead us directly to the hermitage, at a little over a thousand metres above sea level.

In addition to the tiredness, the views will leave us breathless because, if the day is clear, we can see in the distance each and every one of the great Galician mountains. The route continues downhill, along a road on the right or returning to the path we took up, and after just a few hundred metres, climb slightly up to the height of a boundary stone. We then take another road on the right that continues to plummet for about five kilometres, just up to a bridge we cross to follow the trail of the windmills.

A large monolith will show us that we are on the right track, towards the Pazo de Camba. Also known as “Casa dos Churruscaos”, this building belonged to the Camba family, who dominated the area for many years. There are traces of this building from the ninth century onwards, specifically of its chapel annexed to the Casa Grande by an upper passageway. After this mandatory stop we continue through the valley of the Hermida until Rio. From here, we continue on to Rodeiro, about four kilometres away, passing first through Mouriz’s place We will finally reach the town hall square, built over an old fortress and which has a large fountain. We cannot leave here without visiting some of its churches, considered by many as authentic jewels of Galician Romanesque architecture.

On climbs as hard as this one, it is advisable to be prepared, both mentally and physically. Visit our advice, On the Road, about stretching before and after the route so as not to overload your legs and endure the rest of the stages.

The ascent to the hermitage of Monte de Faro is a good idea to take it easy and enjoy the views. This is not on the official route of St. James’ Way, but we recommend taking the marked detour in order to visit it. It is always necessary to be well loaded with water, although at this stage we will find several fountains where we can refill the canteens and refresh ourselves. 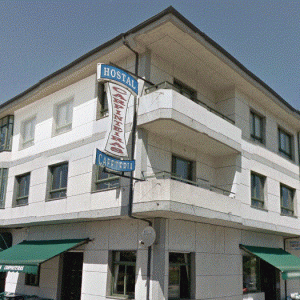 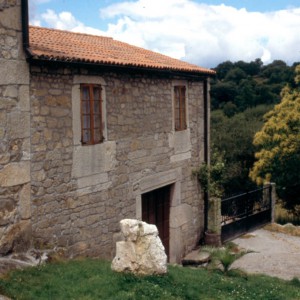