Today we officially entered Galicia, after climbing the natural barrier of the Alto de A Canda. Specifically, we will tread on Galician lands through the province of Ourense, in the municipality of A Gudiña, which will make us feel that our goal is already closer and closer.

From the centre of Lubián, follow the signs to the river Tuela, which we pass first before crossing the motorway and reaching the sanctuary of La Tuiza. This temple, clearly baroque, was declared an Asset of Cultural Interest as it is one of the greatest exponents of the religious culture of the Sanabresa area. From here, the route goes up to the mountain pass of A Canda, and it is imperative to continue by road from here if you travel in winter, given the heavy snowfalls that occur in the mountain. Leaving the temple to our left, we will first descend to the stream of La Tuiza and then we will start the hard climb. In spite of being a great challenge, the beauty of the landscape and the tranquility of its forests will comfort and encourage us in this hard stretch. On the other hand, the road option is more monotonous but shorter and safer. We will crown A Canda in one way or another, a strategic point and bordering the province of Ourense. We will take, momentarily, the national road to get to the nucleus of A Canda, and then take another secondary road. Descending finally, we will pass under the train tracks and cross a small stream before entering the town hall of A Mezquita. We are a little more than ten kilometres away, so it is a good time to take a break and have a drink in A Vilavella, from where we will have to continue our descent towards the Vega do Pontón waterwheel. Gradually, the path will become smaller and we will slowly approach the Abredo River, crossing areas that may be slightly flooded depending on the time of year. A few kilometres away, following these paths, we will reach the hermitage of Nuestra Señora de Loreto, in the concello of A Mezquita. This one is in the village of O Pereiro, by which we will cross next, before entering by a very similar path to the previous ones and to find again with the Abredo, which, now yes, we cross and ascend slightly. Quickly, we go down again towards the watercourse to cross a small stream and, a few metres away, turn left into a road that crosses the railway tracks. A parochial track will introduce us to O Canizo, already belonging to the town council of A Gudiña. From here, there are only about four kilometres to the end of the stage, but first we have to climb up the national road to the top of O Canizo, at a little over a thousand metres above sea level. To enter A Gudiña, take a path on the right, after passing over the motorway, and then a Red Cross building. Then, we turn off towards Viana do Bolo and A Rúa along the local road. As soon as you pass under the train tracks, turn right and a few metres further on you will find the pilgrims’ hostel, where today’s day is over.

It is important to bear in mind that from A Gudiña until Ourense (still three stages away), you will not find any more ATMs. If we need to get money out, this would be the time and place to do it.

We will ascend in quite a few points, but they will be relatively smooth climbs, so this stage is not an added difficulty for cyclists or people with reduced mobility. 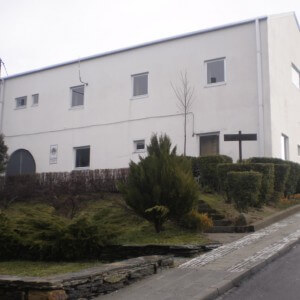