Signposting on The St James Way 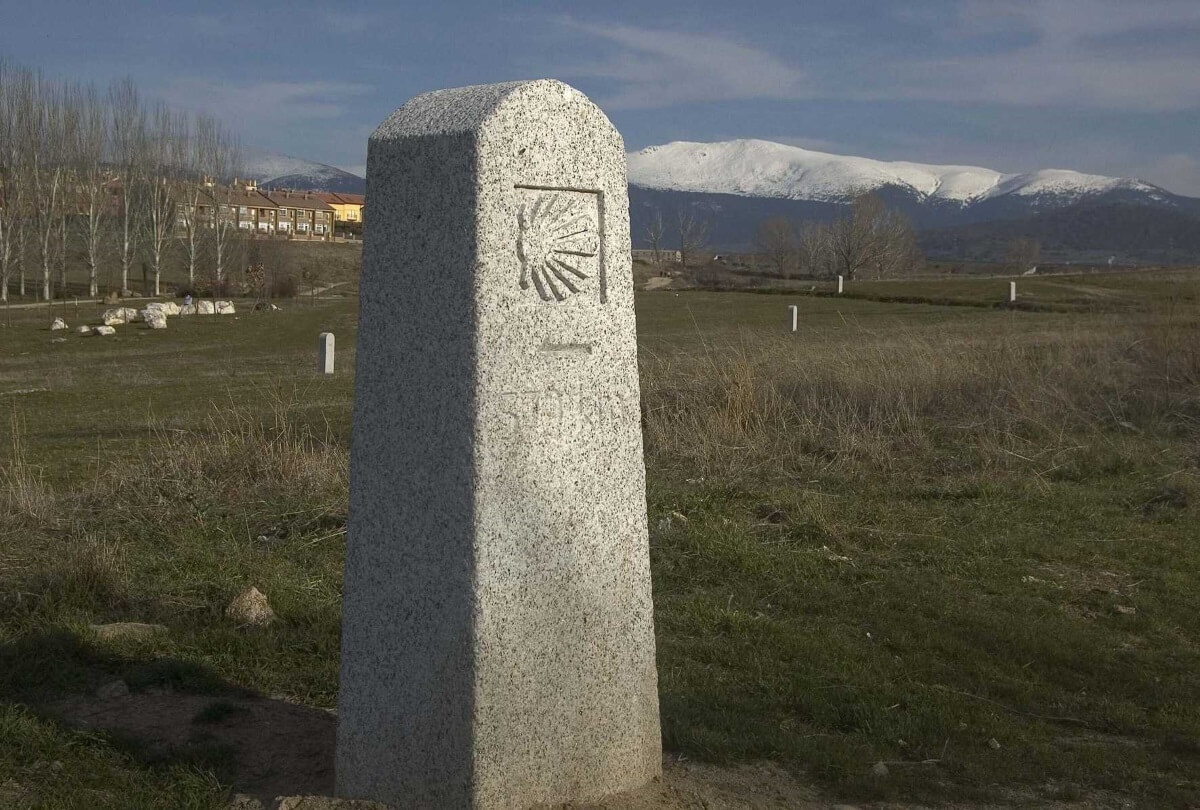 All The Ways to Santiago are marked. Depending on the area or region, could be more or lest frequent, but you will always find a signpost. All along your way, you can be guided following these signs.

A little bit of history…

Thanks to all the publicizing made for the Holy Year in 1993, The Way of St James stood out among the Pilgrimage Routes around the World

In fact, many meetings were hold in order to promote The Way of St James with some Japanese agents of the Shikoku and Kumano Kodo Ways.

Bonds were settled seeking for qualified advices to improve their signposts.These small details remark that outside our borders, our signals are an example for those with the same difficulties.

They become part of the routes.

A wide diversity of expressions are designed to help the pilgrims in order to guide themselves. Some of them are the yellow arrow and the scallop shell. All those markers are already part of The Way’s History and were adopted as well as proper symbols of the city. This is clearly reflected in all the merchandising.

A good signposting is essential when it comes to attract potencial pilgrims, as inspires confidence and calm in planning this adventure.

We can find this markers all along The Way. Their aim is to indicate that you are walking in the right direction and guiding in those uncertain points where doubts about the way to Santiago can arise.

Among all indicators, the yellow arrow is the most relevant one, since all the different ways are signaled with this type of arrows conducting pilgrims on their route. You can find them painted on trees, on the ground , on posts, on churches, on the rocks…

Their origin is linked to Father Elias Valiña , born in Sarria but raised in O Cebreiro, where he served as a priest and was in charge of the restoration of the Hospital and Sanctuary of Saint Mary of Cebreiro.

He is as well one of the most influential and relevant personalities of The Way of St James and also known for signaling several times all the French Way with the yellow arrow from Roncesvalles to Santiago de Compostela, with the clear aim of improving and promoting The Way of St.James, of which he was a strong advocate .

Why The Way’s arrow is yellow?

The choice of the yellow colour was a coincidence as the paint was a gift. After completing the painting works consisting in drawing the lines on the road , the operators decided to give the leftovers of the paint .

It is funny how such a simple symbol as a yellow arrow has become one of the most iconic images of The Way.

It could become subject for advertising campaigns and inserting sponsors’ logos. However, following the Way’s heart and Valiña’s spirit, remains as a plain mark with no more pretensions than avoid unnecessary diversions to absent-minded pilgrims. 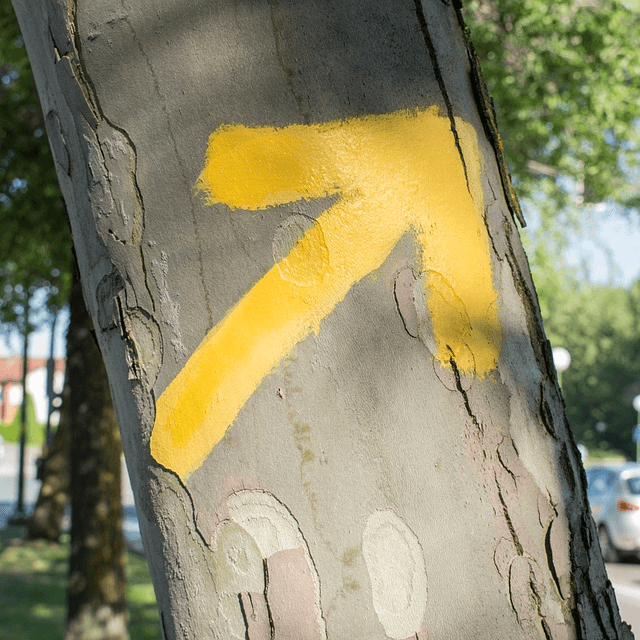 The second most important signal are the milestones, constructions made of stone and concrete where you can usually find the arrow mentioned before , the iconic scallop shell and in some occasions the kilometers to Santiago.

Depending on the province or region where the pilgrims are walking, milestones can show a different size or design. Galicia’s area is the best signaled one, as there’s a milestone every 500 meters. This signposting was approved by The Local Government in 1993 to promote the pilgrimage In addition, it is signed as well with a milestone every time The Way crosses a relevant site with a remarkable religious, historic or monumental importance. This way the pilgrim is informed taking time to enjoy the experience to the fullest

Lately, the traditional milestones have been substituted by new ones, causing certain controversy. In the new ones we can find a yellow scallop shell over a blue tile besides the yellow arrow indicating the way to go.

In case the arrow is blurred o erased we must be very careful as the correct direction varies depending if we are inside or outside the Galician’s Region.

Outside Galicia,the lines of the scallop shell tends to point Santiago de Compostela. If the lines get together towards the left, we must follow that direction. On the contrary , inside the Galician’s Region the direction to follow is the opposite. We must follow the direction where the lines of the scallop shell are divided. Following the previous example now we should take to the right. 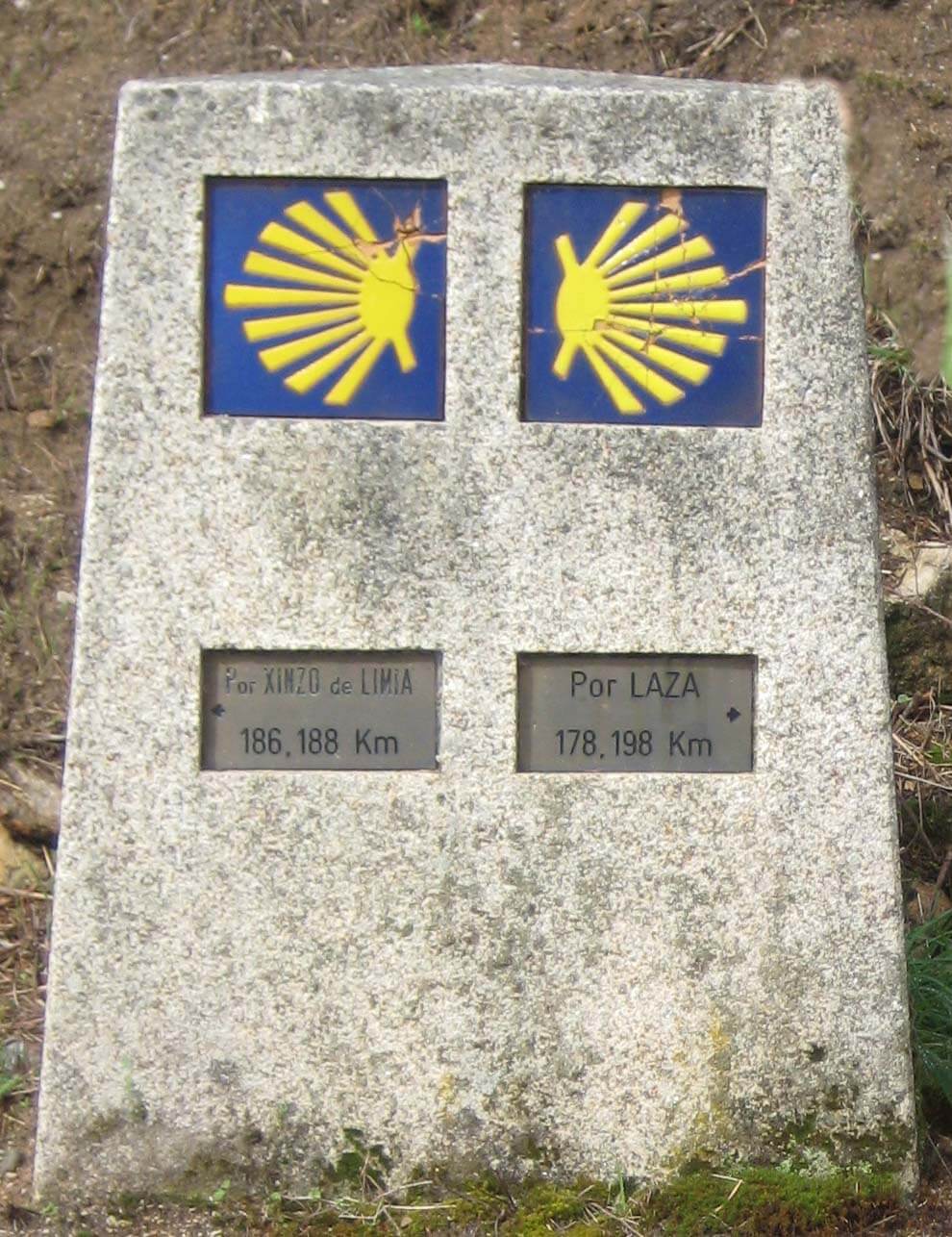 In every Region the signposting will be different and we must follow them to avoid getting lost.

Apart from the arrow, the most popular sign is the scallop shell that identifies The Way as a Cultural European Route

To a lesser extent, we will also find this different version of Shell along the Way.

It is also probable to find the scallop shell attached to the facades of some houses and churches, on the floor or at some strategic points easy to locate while walking. This symbol has been bonded to the Way for centuries and it is printed on many pilgrim’s clothes

The scallop shell is an easy item to find in the Galician’s coast. In the old days, pilgrims used to take theses shells with them on their way back home to shown them as a proof of reaching the ending point, Santiago de Compostela.

Years later, it was also used to drink water on fountains and streams found on the way.

Other signs found in The Way of St. James.

Other regions have additionally decided to add supplementary own signs. In Navarra we can find white and red signs called GR 65 (Great Route) . In León they started to add the figure of a Lion disguised as a Pilgrim, but they stop using this symbol as it wasn’t welcome.

In addition, we could see in some points of the route something called “milarios”, old cylindric constructions that used to be located in the old roman sidewalks to indicate 1000 steps (a mile)

The ultimate option to be guided, is The Sun as will never fail, unless there is a cloudy day. If pilgrims wants to live a pure adventure in The Way, they should use the Sun as a guide to locate the starting point and the direction to go.

Regarding the most traveled route, The French Way, the path goes practically in a straight line from East to West, that means the Sun will shine the pilgrims on their left side, in the morning on the neck, in the afternoon on the face.

From 2007 an accurate delimitation and exact definition of The Way was something imperative,due to a UNESCO command in order to keep the title acquired as Heritage of Humanity

From that moment on, all markers should display the same design. That implies the scallop shell, the arrow that shows the direction and the number indicating the distance to Santiago de Compostela.

Lately it has been incorporating alternatives routes for the pilgrims, which has resulted a bit striking.

The result: A diversity of ways. On the one hand, the historic route and subsequently alternative paths followed as a habit. The first option coincides with the original way, meanwhile the alternative paths contain diversions allowing the access to touristic, natural, gastronomic or historic sites

These alterations on the Way, created a controversy as some villages will be favoured at the expenses of others. 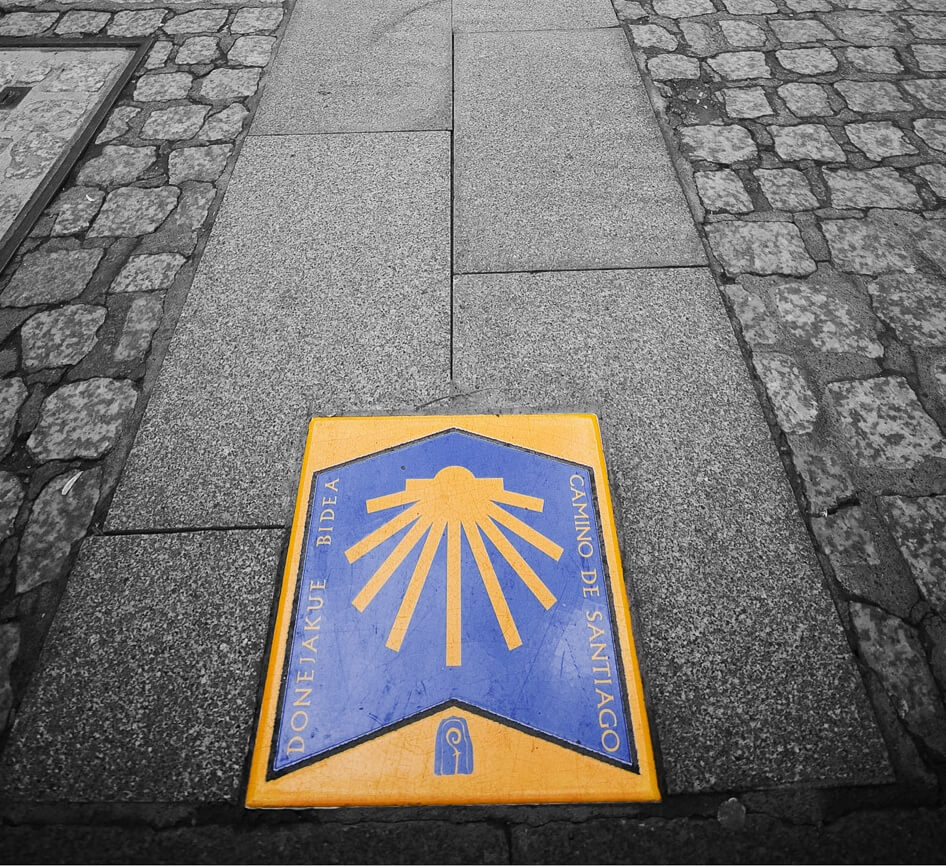 Finally the last sign we will find are mounds of stones left behind by pilgrims , indicating they were once there. In the local language these mound of stones are as known as “Milladoiros”

These stones represent forms of penitence. Legend has it that the one that takes a stone from the starting point to the Milladoiro, get the remission of the sins according to the size and the distance walked with it.

Now you know all the available sings you can find along the pilgrimage, you are prepared for the challenge of arriving Santiago where you could enjoy the Cathedral and pay tribute to the Apostle St.James.

Leaving aside some questions, The Way of St. James shows an exemplary signposting, which was copied by many other pilgrimage routes.

From Pilgrim, we encourage you to take a change and try The Way. You will verify how difficult is to get lost once you follow the signposting and the professional pilgrims who knows the routes as the back of their hands.

In the rare case you get lost and if you have planned your route with us, we can assist you as you can call our emergency phones to obtain our help.