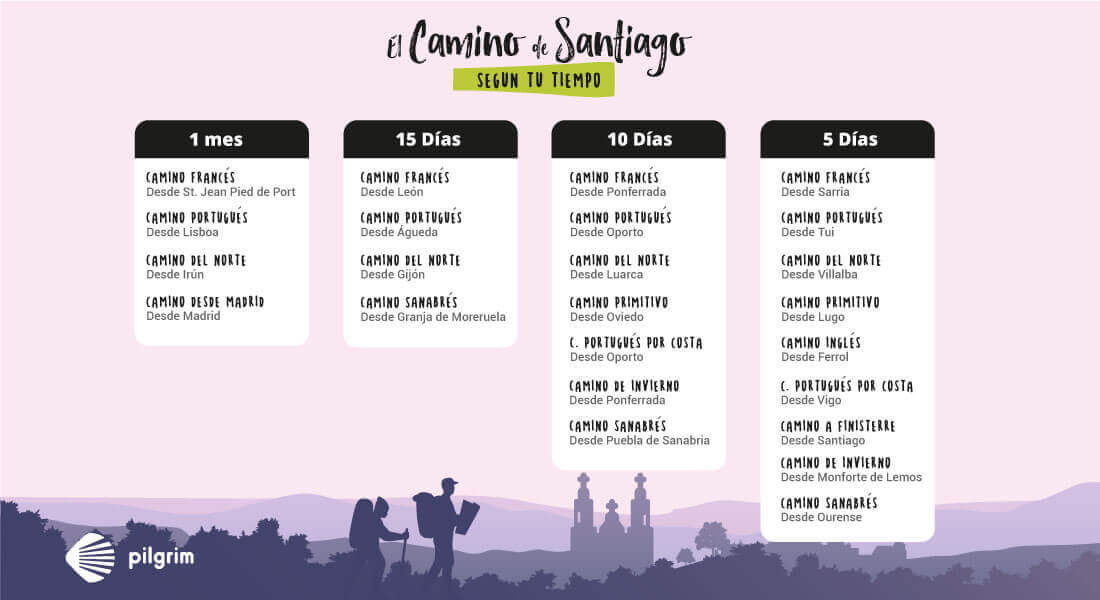 When you decide to do the Camino de Santiago, there is an important factor to consider: how much time you can spend in getting to Santiago de Compostela One of the good things of the Camino is that, apart from giving you the opportunity to choose which route to do, you can also choose where to start from. Just remember that, if you want to obtain the Compostela, you need to walk at least 100 kilometres or cycle 200.

You may also be interested in: Camino de Santiago organised

Do the math: the average length of stage is 20-25 km, which roughly takes 5 or 6 hours. This way, 5 days would be just about the minimum necessary to cover the 100k

Do you have more time? Great! Then you can dive deeper into this experience and chose between a wider range of possible starting points. To find out more about some of the different possibilities, keep reading, from Pilgrimwe have done the calculations for you

The Camino de Santiago in 5 days

If you can spend no more than 5 days in the Camino, worry not. 5 days is enough to walk the last 100k of any of the routes so you can obtain the Compostela upon arrival to Santiago. See below to discover the different options and which one suits you better.

Although some pilgrims prefer to do it in 6 days, the most popular choice is the 5 days option.

The stage that goes from Palas de Rei to Arzúa can be easily divided in two shorter ones. This way, some pilgrims stop in Melide and have a good rest before going out for some of its famous octopus, adding an extra day to their Camino.

Nevertheless, the entire 29 km are not so hard to walk in one day, which is what most pilgrims do, finishing their Camino in exactly 5 days.

The second most popular option amogst pilgrims who cannot spend much time in the Camino is to start in Tui, very close to the border with Portugal, hence the name of the route.

Walking from Tui will also grant you the Compostela, since this route has almost 120 km. Moreover, its easy stages will take you through some beautiful places of southern Galicia, including Pontevedra, capital of the homonymous province.

The Portuguese Way can also be done alongside the coastline. Since it was the last route to become official, it is not too crowded and, as it runs next to the seaside, it offers some of the best landscapes in the Camino de Santiago.

For a 5-day pilgrimage, you can start in Vigo and enjoy the seaside until the diversion towards Santiago. You will see some of the most impressive sunsets!

If you are looking for a route less crowded than the previous options, the Northern Way from Vilalba is a great choice

This route will take you through inland Galicia, visiting many typical villages. Peace and quiet are guaranteed.

The Primitive Way is always a good choice. Its historical value comes from the fact that this was the first route of the pilgrimage to Compostela.

There are just over 100 kilometres between the Roman town of Lugo and our destination. Before you start, take some time to get to know its historical walled town.

The entire English Way has 122 kilometres. It is the only one that you can walk entirely in just 5 days, as its starting point is Ferrol.

This was the route originally taken by British and Irish pilgrims, as well as Scandinavian, that reached Galicia by sea and disembarked into the port of Ferrol to continue their Camino by land.

Camino to Finisterre from Santiago

In this case, departure will be from Santiago No one ever said that you could not enjoy the Compostelan city and its cathedral before heading off to the end of the world…

In just 4 days you can reach your destination and obtain, in this case, another certificate: the Fisterrana, which accredits that you have completed this extension of the Camino de Santiago.

The Winter Way , as its name suggests, was the route pilgrims used to take to avoid the snowy hills of O Cebreiro during the coldest months of the year.

Its total course is 250 kilometres, so if you have only 5 days, Monforte de Lemos would be the best starting point.

The Sanabrian Way Way is an extension of the Silver Route, crossing Ourense province as well as Pontevedra.

If you start in Ourense, you can walk the 124 km that separate this city from Santiago in just 5 days.

The Camino de Santiago in 10 days

When you have 10 days to live the experience of the Camino, the possibilities of starting your adventure from outside of Galician territory and even from Portugal increase considerably. Here are some ideas to make your Camino de Santiago if you have this number of days:

If you can spend 10 days in the Camino during spring or summer, the popular French Way awaits, this time from Ponferrada.

Along a 200 km course you will enjoy 10 (or 9) stages of the most travelled route of the Camino, savoring the Ancares mountains and the village of O Cebreiro, the first within the Galician region.

An alternative route departing from the same town is the Winter Way, which avoids any possible snow in the Ancares in winter and the sometimes overcrowded last few stages of the French Way in summertime.

From Ponferrada, you will have the chance to visit Las Médulas and the Ribeira Sacra. The entire course is 50 km longer than along the French Way, but it is worth it.

If you choose to walk the Portuguese Way, the bustling city of Porto will be your departing point. This way, you will walk 5 days across Portugal, and another 5 across Galicia, in Spain.

Moreover, from Porto, there are two different routes:

You can choose whether you prefer to take the most traditional route through inland Portugal, or relish along the Atlantic coast.

The white village of Luarca is a good starting point to begin the Camino del Norte in 10 days, to continue later through green landscapes and near the northern coast of the country.

Along this route you will pass through beautiful coastal villages such as Ribadeo, where you can visit the famous Playa de Las Catedrales (The Cathedrals beach), a must see without any doubt.

Oviedo itself is the starting point of this route of the Camino, so setting off from here, you will be completing the entire route, if you have the time.

The Primitive Way is not the easiest: it runs through mountains until Lugo, so you need to be in good shape. From there, it becomes a little easier and, from Melide to Santiago, you will share the path with pilgrims walking the French Way.

Walking the Silver Route this is the alternative to joining the French Way in Astorga, going through Ourense province, instead.

From Puebla de Sanabria, you will be walking almost half of the entire Sanabrian Way. In fact, it is a very popular starting point.

Before setting off, it is worth visiting its old town!

The Camino de Santiago in 15 days

Here are the best options for a two-week experience.

There are about 300 kilometres from León to Santiago, one of the most important towns along the French Way and the second most frequent starting point, just after Sarria.

In this city you can visit the impressive cathedral, famous for its colourful stained glass windows, before joining many other pilgrims on your way to Santiago.

The second most popular route of the Camino is always a good choice. This time, the starting point would be Águeda, known for its famous colourful umbrellas.

If you happen to start start in July, you might be able to enjoy the local festivities, that fill a 3-week period with all sorts of cultural events in what is called the AgitÁgueda art festival.

Don’t forget that, from Porto, you can choose between continuing through central Portugal and diverting towards the coast.

From Gijón, you can mark the beginning of your adventure with some Asturian cider. Northern Way from Gijón

Although the first few steps of your Northern route will run through a rather industrial area, you will soon leave that behind to give way to the characteristic green landscapes of this part of Spain before reaching the seafaring town of Avilés and its historical centre.

In 15 days, you can complete the entire Sanabrian Way from its starting point: Granja de Moreruela.

This route, also referred to as the Mozarabic Way, will take you to Santiago entering Galicia by A Gudiña, where you can decide to continue via one of these two towns:

The Camino de Santiago in one month

If you are willing and able to face this challenge, here are the different starting points we recommend.

If you are willing and able to face this challenge, here are the different starting points we recommend.

It will take you 30 days to complete the entire French Way from its starting point, the beautiful French town of Saint Jean Pied de Port.

Bear in mind that the first stage is quite difficult. In fact, many pilgrims prefer to skip it and start in Roncesvalles, on the Spanish side of the Pyrenees. Nevertheless, from Pilgrim, we encourage you to start from the very beginning and take pride in having completed the French Way in its entirety.

After the first stage across the mountains, the rest will be a piece of cake.

The capital of Portugal is the very starting point of the Portuguese Way From here, 616 kilometres separate you from the Galician capital – 641 km if you opt to take a diversion and visit Fátima, famous for the appearance of the Virgin to three local shepherds.

From here, take the time to explore Lisbon before setting off northbound and delight in listening to fados, you will not want to leave! They will captivate you like a siren song!

The total distance between Irún and Santiago de Compostela, along the Northern Way, is 820 kilometres.

This route is chosen by more and more pilgrimseach year due to the beauty of its landscapes, but be aware that it can be very challenging too: across the Basque Country, the Camino runs mostly through mountain ranges, although it will give you the chance to see important cities like Donosti or Bilbao.

Across coastal towns mountains and small villages, you will reach Arzúa, where the Northern Way joins the French Way until the very end at Praza do Obradoiro.

We could not leave out the Camino de Santiago route from the Spanish capital, especially recommended for spring or autumn, when temperatures are milder.

Although not many people knew about this route until recently, it is gaining popularity among pilgrims. Just like the tradition said, “from your doorstep”. This route joins the French Way at Sahagún and continues along the same path until Santiago de Compostela.

Pilgrim walks with you

As you can see the Camino adapts to each pilgrim and there are plenty of options depending of how much time you have.

In Pilgrim, we help you plan your adventure so you don’t miss anything before, during of after your Camino. Contact us to have an unforgatteble experience!

Enquiries are welcomed and without obligations.